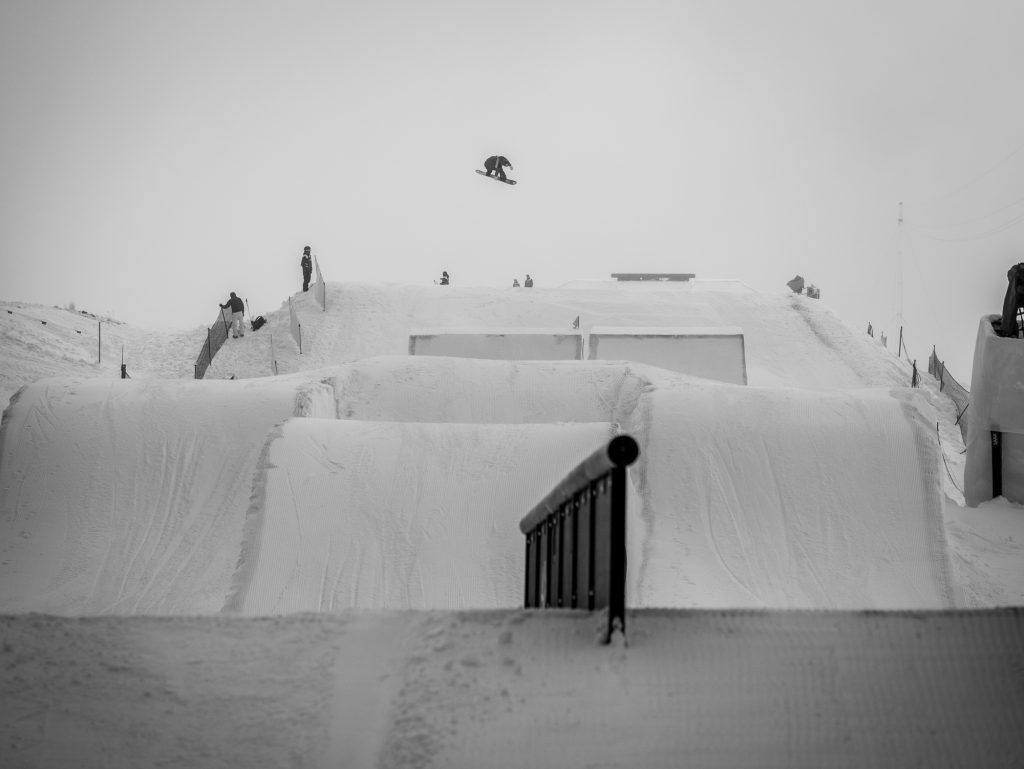 Niklas Mattsson is one of the sickest riders to watch but somehow manages to get unlucky in contests. Here he is fog riding during practise day.

We’ve said it before and we will say it again. There is no place on Earth like Laax and consequently no other contest like the Laax Open. We’ve been here for a week straight and witnessed some of the best riding of all time. With a new organiser in charge, the infamous FIS, many were worried that the more regimented rule book would have a knock on effect on the vibe of the Laax Open. If anything, removing the invited riders and making the whole contest an event you needed to qualify for made for a more exciting contest. We personally did not see a difference in atmosphere and whilst some of the judges scores were a little hard to understand at sometimes, the overall results were spot on. 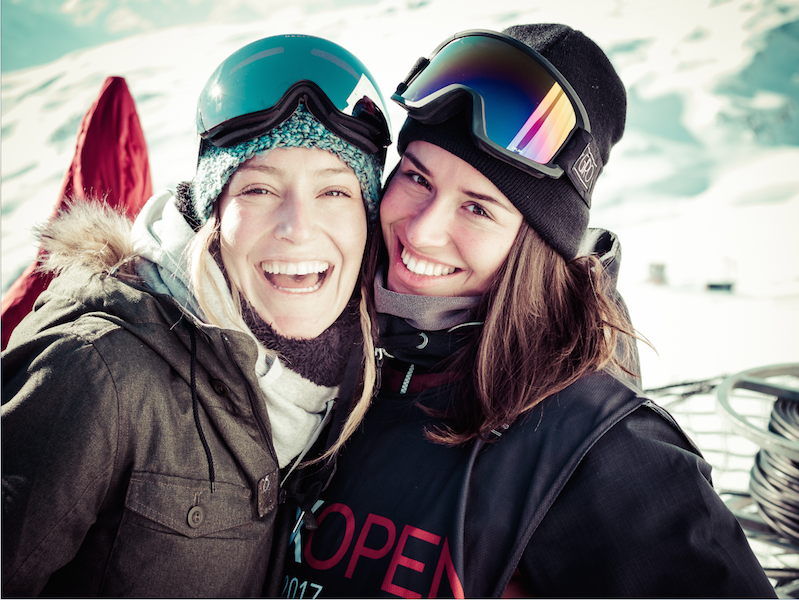 What other sports have a camaraderie like this? Jamie Anderson and Klaudia Medlova hanging before finals.

Today’s Women’s snowboarding is probably the most exciting it’s ever been. Whilst Jamie Anderson has ruled the roost for years, the other competitors have been catching up and now it’s impossible to predict who will win. Finland’s Enni Rukajärvi could be the most nervous competitor at every event but one of the most stylish and she is able to not only pull out the bangers but with a silky smooth tweaked style. Her run of a boardslide pretzl out, sw back 1 mute over the rollers, fs 7 tail, back 5 stale, cab 7 stale secured her first gold in laax since her 2010 win at the BEO. Right behind Enni was Austrian powerhouse Anna Gasser who has literally been on fire this winter. Rounding up the podium in 3rd was Jamie Anderson. 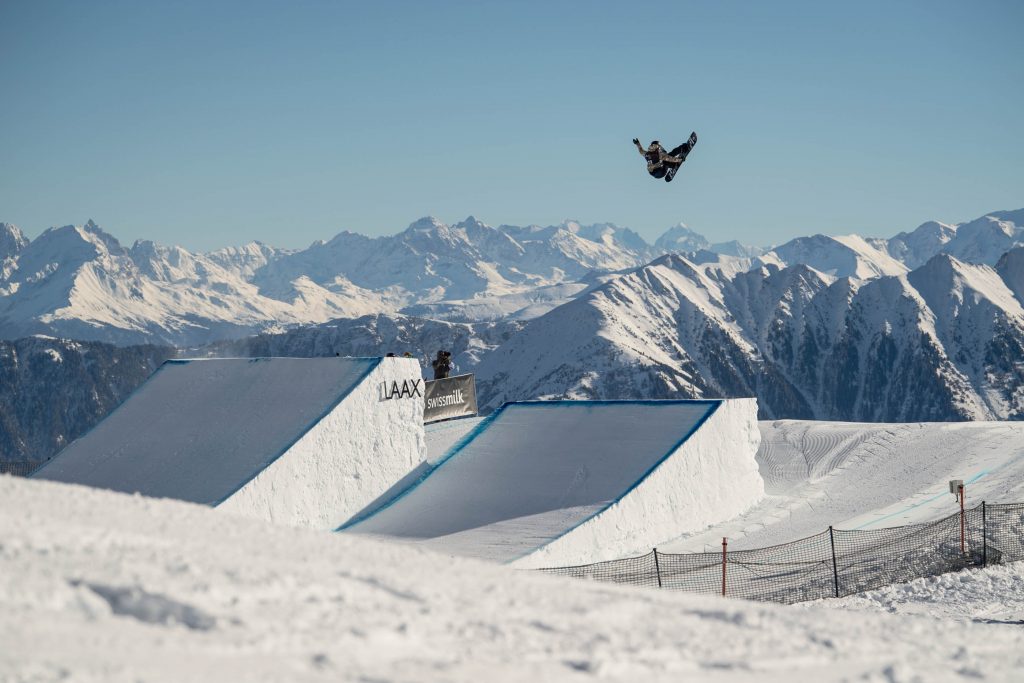 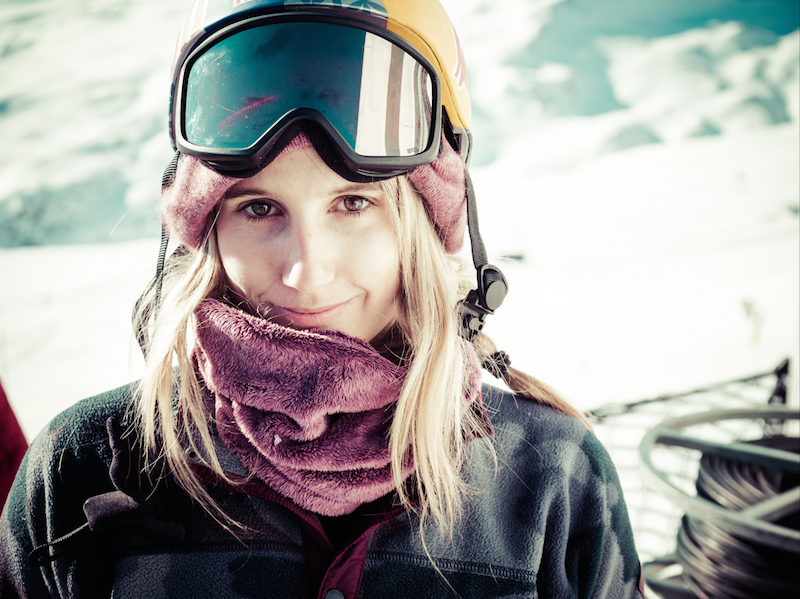 Men’s Slopestyle.
The lead up to the men’s finals saw some notable absentees from your regular invitee contest with only 3 Europeans making the grade to make it to the 6 man final. Straight out of the gate it was clear that the Canadians were not messing around and Max Parrot snagged the top spot after throwing down a ridiculous final run consisting  of a 50/50 to Backlip on the rail, Bs Rodeo 9 over the roller, Cab Double 12 Mute, a FS Triple 1440 and a BS Triple 16 Mute on the kickers.  The bookies favourite and fellow Canadian Mark McMorris just couldn’t get his run to stick and had to settle for second and Tyler Nicholson was awarded the bronze, resulting in an all Canadian podium. 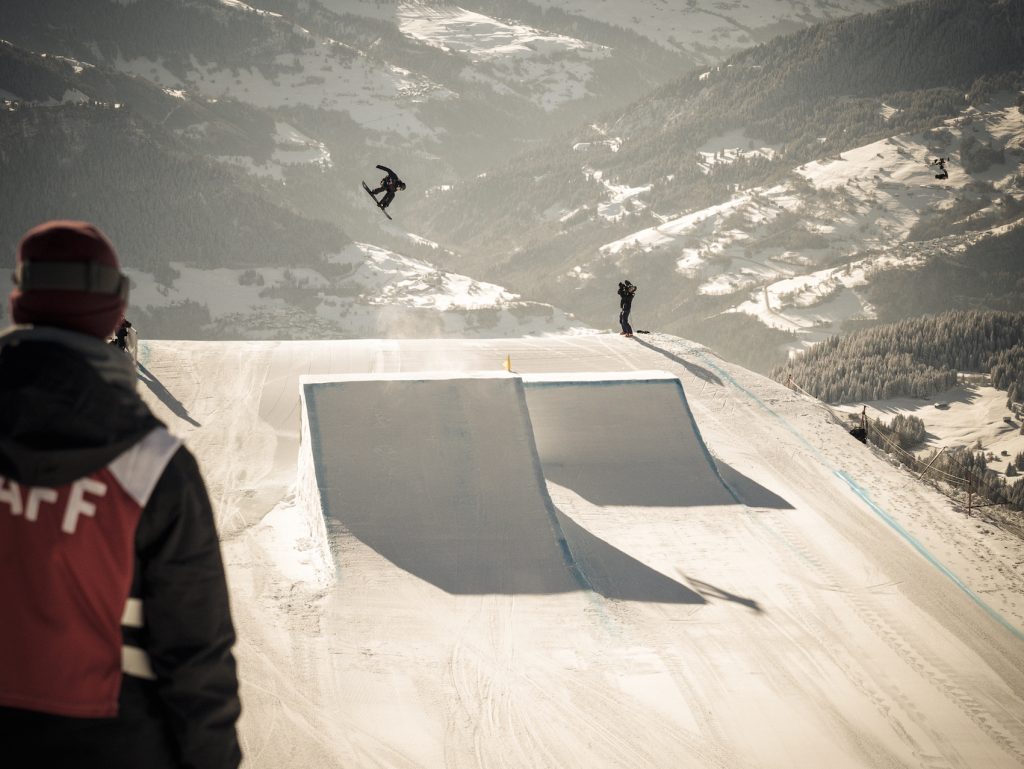 Parrot heading for the gold in front of security. 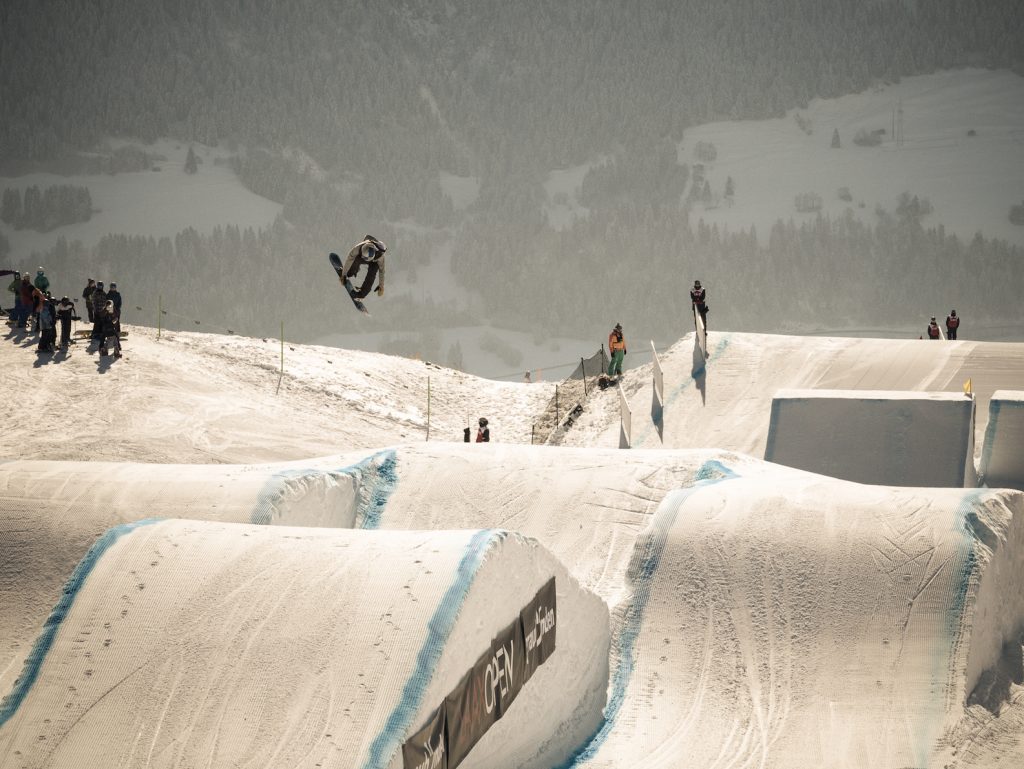 Women’s Pipe
The 2017 Laax Open saw the return of one of the most dominant snowboarders of all time Kelly Clark, who has been absent due to injury and it was good to see her back in the fold as her huge fs 10’s are powerful to see live. At the moment though, there is just no stopping 16 year old Chloe Kim. Burton Snowboards have always been great at finding new talent but they must have felt like all their Christmas’s came at once when they discovered Kim as it is clear she is set to win pretty much everything she enters for the foreseeable future. With a run consisting of a gigantic Method to FS 10 tail, cab 5 stalefish, SW Back 5 mute and a cab 7 Stalefish earnt her 90.50 points. Last year’s winner Arielle Gold  from the US grabbed second and China’s Xuetong Cai came third with 85.25 points. 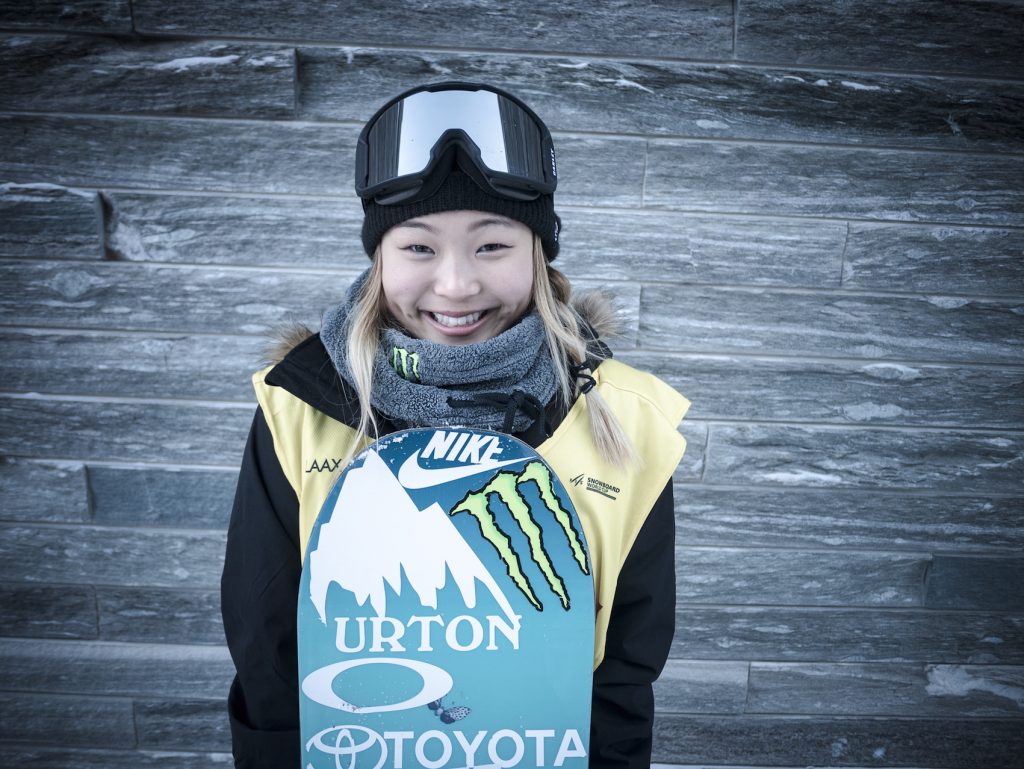 A long career ahead of 16 year old Chloe Kim 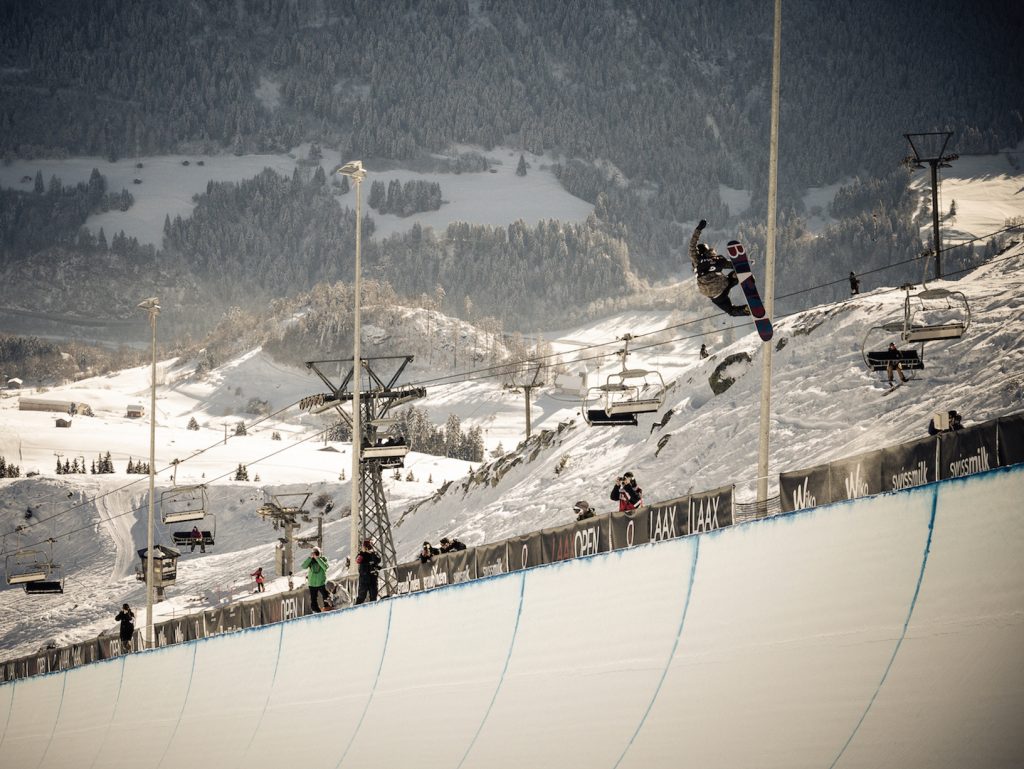 Kelly Clark back from injury

Men’s Pipe
I’m pretty sure i’ve said the words “Best final ever” for the last 6 years in Laax but yesterday’s men’s pipe finals were simply mind blowing. Every rider went bigger than ever before and the contest was truly anyone’s for the taking. The shock of the week was that Swiss heros Christian Haller and David Hablützel didn’t make the finals, a place one can usually put money of them attending. That left the door wide open for fellow Swiss Jan Scherrer, who threw down the run of his life and taking an early lead in a contest where the podium spots kept switching.
The US’s Chase Josey proved he can deliver under pressure as he pulled a double Michalchuk to FS double cork 10 stalefish, switch double crippler indy, switch double michalchuck melon and a cab double cork 10 mute to get a well deserved score of 97.5 points. With thousands of spectators screaming in unison at what they had just witnessed,it had all the familiarities of ancient Rome.
It was clear that his run couldn’t have been topped by the others, Scotty James came the closest in second and Ipod came in third. 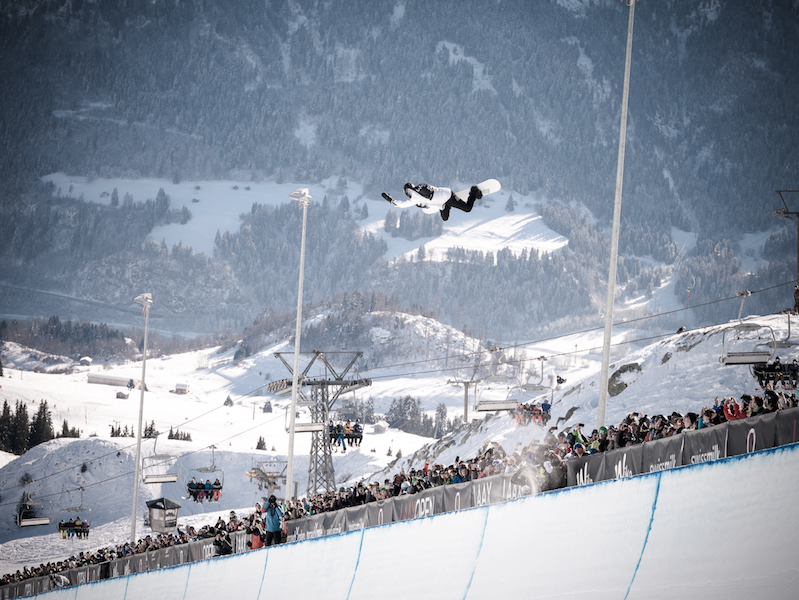 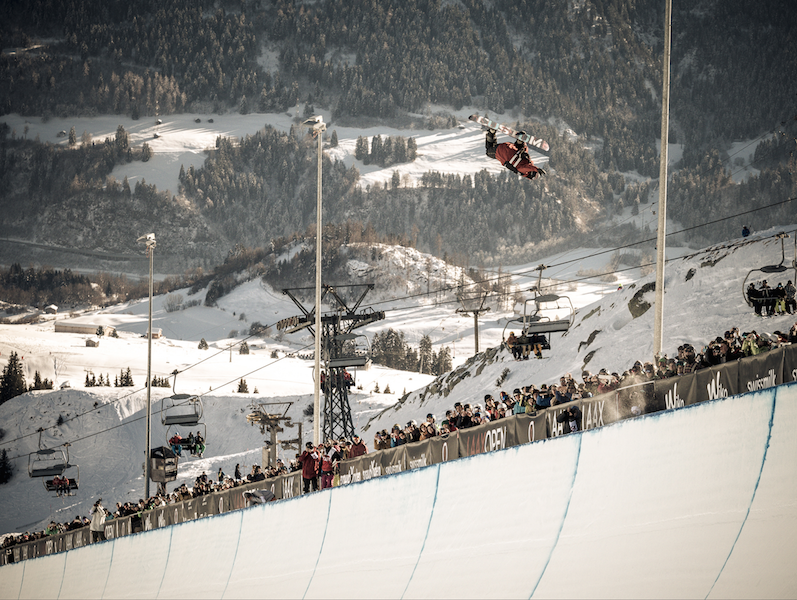 With the pipe done and dusted it’s a wrap from yet again an incredible contest. Long live Laax.