Grindhouse is now in it’s fifth year and one of the most respected European video productions around. In this day and age though, with marketing budgets getting slashed and the rise in popularity of web edits, making a full length video is tough. Here we talk to Grindhouse creator, filmer and editor Jamie Durham, to find out more on the highs and lows of modern day snowboard video production.

Grindhouse managed to quickly gain a strong foothold in the snowboarding video production world for the first movie, what did you do right that gained that traction?
I’m not fully sure, maybe we got lucky. It was at the time when DSLR video was kicking off and it gave a different look to the standard HVX200 video camera most people where using. I guess social media was a big part as well, which helped it all to get picked up. But I think there was a really good vibe and motivation from the people involved when it started and that showed through and there didn’t seem to be much going on in the UK scene at the time.

For people that don’t know, how does it work with producing a snowboard video. How do you pick the riders and how do the sponsors get involved?
For us it has always been a friends situation and from there if the rider who I’m filming with has sponsors they are approached to help back the project. For some crews, riders can only film in the projects if their sponsors can afford the buy in. It has its plus and minus doing it that way, if your all friends to start with then you know you have a crew bond but if you bring in someone just because a sponsor has paid for them to be in it then you don’t know if everyone will get along on trips.
We have been lucky that a brand such as Monster has financially supported us from an early stage.

Have there been any sponsors you have turned down?
Yes actually there has been, I had quite a good offer from a big company, (not directly snowboard related) that wanted all the riders to wear some of their clothing and stickers. It could have been a good source of income for the films but it just wasn’t really right for Grindhouse and the riders. 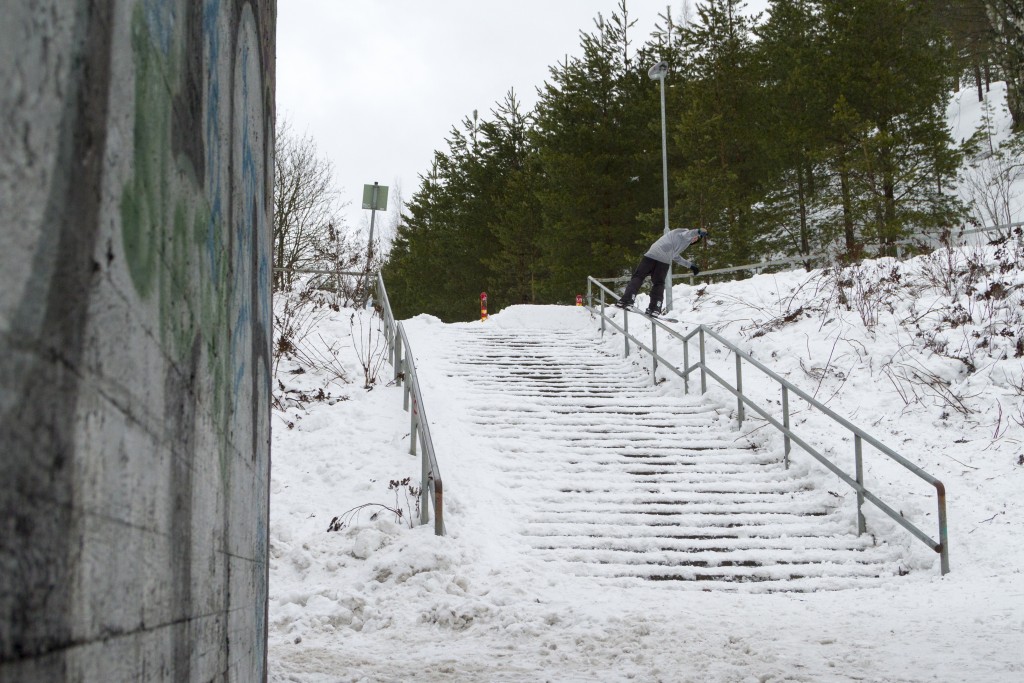 Andy Nudds on set for Afterlife

At one point in time there were bucketloads of video productions in Europe but the numbers are dwindling each year. What is the reason behind so many companies quitting?
There are many things that have made this happen. When you get to a certain point in filming a full length movie every year you realise how much time and effort it takes. We usually start filming in December and finish in April or May. That’s 5 to 6 months a year where the people involved are not making a proper wage unless they are in a top production. I guess a lot of the crews were finding it hard to make it work and not get in debt. When you get a bad snowfall one winter it can have an effect on everything we do, less snow means less people buy product which means brands cut marketing budgets. There has also been an oversaturation of free content online.

Talking of  brands cutting their marketing budgets, is that harming snowboard video production as well?
Yes massively, it takes a lot of money to make a snowboard film. People don’t want to buy a film anymore, they want to download it for free so sales are dropping in that area I guess. So the only major area a film can be funded from is the sponsors. Of course you can still make films without much budget, but then you get very limited with what you can do especially if your from a country which has hardly any snow, which is partly why I moved to Helsinki a few years back.

A lot of companies now focus on web edits but Grindhouse has maintained the traditional format of a yearly release. What are the advantages and disadvantages of working this way
We actually started with web edits and moved into traditional yearly projects, I think most things have gone the other way!

The advantages of concentrating just on one yearly release is you have a lot more content and time to produce it. You are able to cut a lot of the not so good shots out of it. Sometimes it looks like some edits have been just made for the sake of having content. I don’t think that’s a good approach if the edit isn’t saying much, just the same old stuff – there is no real need for it.

The disadvantage is that people don’t hear or see what your doing so much on social media until you release a teaser. So edits are good for keeping that going. I try to keep Instagram up to date instead with photos or small 15secs of footy to keep people interested and so that they know that we are making something that will be released in the future.

Who are your rivals? I would say postland are quite similar in their movies and you’ve shared a few riders. Do you get along or is there beef there?
No beef that I know of?! Haha. I don’t know if you can really view other crews as rivals, people are not really competing with each other as such. As Will and Ollie where filming with Postland we kept in touch to see what everyone was up to and what they where filming, it’s good because it keeps people motivated and we can let each other know about how much snow a town has etc. As they we where filming with Postland instead we referred to them as ‘Poachland’ but it was just banter we would have while digging a spot. I guess there is a certain amount of competitiveness because we would be competing with each other for sponsors budgets as we are both on a Euro level now, and I think we did loose out on some to Postland.

There is a whole new line up for Grindhouse this year, what was the reason behind that?
Well I’m now living in Helsinki and I got to know the KBR crew out here, Petrus wanted to take a year out from filming and producing so Janne, Antti, Sakari and Petrus wanted a project to get involved with. It just kind of seemed natural to include them. Will and Ollie wanted to film for Postland instead this winter, I was pretty gutted as it left a hole in the crew and they have been involved from very early on, but it made room for the Finnish guys at the same time to get involved. Everything worked out well in the end, everyone got on well and worked together even pushing each other harder on the spots. 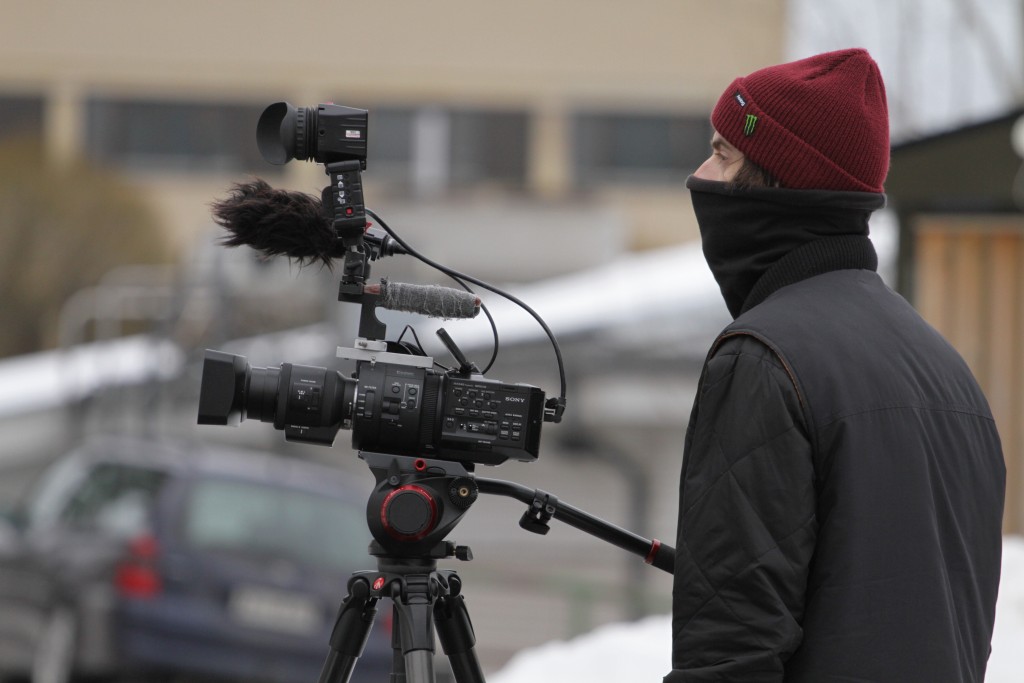 You funded your latest production by asking for funding from the public. How was the response from the public and was there any backlash because of that?
I think the public responded really well and got behind the project. I wasn’t sure if we would be able to pull it off so late in the season but the target was reached just in time. I was a little bit worried there would be some comments on social media about why we needed extra funding when there are some big companies usually involved but there wasn’t anything negative online (which is unusual!) At that point I don’t think we had any sponsors fully locked down and I was stressing that I wouldn’t be able to finish the film.

So there was no backlash from the public that I know of but there was some from inside the industry with the idea that it made people look bad. But in my opinion there was no other option, I couldn’t press the pause button on winter and wait for funding to come in. If I waited any longer then the film wouldn’t have been finished and the riders wouldn’t have had anything, so I think we did loose some support for the Kickstarter campaign.

If money was no object where would you shoot and who would you take with you?
I would try and find some places that haven’t been filmed before or very little. It’s weird, I always think of places and research them in the summer and plan to go, then we never get a budget in time and someone else from the bigger productions always ends up going there out of the blue. It would be good to find some locations in Russia or some former Soviet Union countries, I think there would be some good street to be filmed in them. Also South America would be fun.

I was pretty stoked on the crew this year, it is well rounded and could film street and back country so I would probably keep it the same! 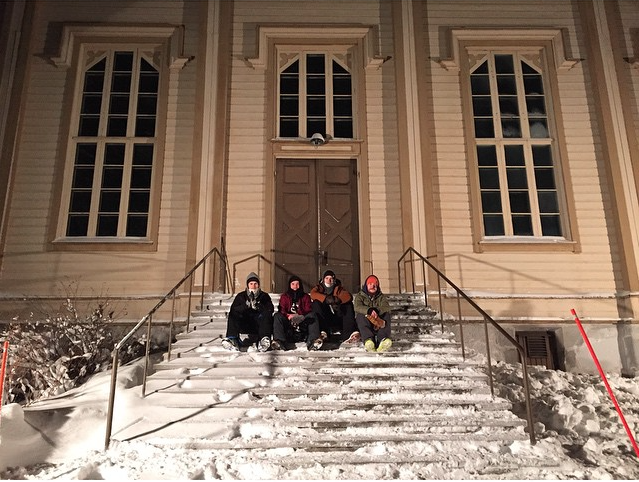 Injuries are an inevitable part of the job, who got broken off this year?
We had a pretty rough year with injuries. I think the first was Petrus in January. We where filming a large steep wooden rail which went on to a frozen lake. The size and steepness of the rail meant you picked up a lot of speed and unluckily he came off early and hit the ground pretty hard blowing his ACL.

Then Janne took a really hard hit to the thigh (see the Transworld Monday Mallet for that one). Luckily nothing was broken, just really badly bruised and swollen with some weeks off. Jonny took a bad slam to the knee not long after that and the doctor reckoned he had cracked his tibia and fibia in one hit so he went back home for a few weeks to rest up till it was good to go again. He flew back out to Finland and after maybe two or three spots he took another slam and blew his ACL as well.

Ollie was with us shortly and managed to dislocate his shoulder and had to go home and the ball was damaged quite bad so that was the end of his season. Then I broke my ribs filming a follow cam at night and the generator run out of petrol so the lights turned off and I ended up bouncing off another kicker we built and back tacoed a stone wall. Didn’t get it checked out for a week or so and rolled over in bed one morning and it just popped again so we had to go back to the same Hospital in Mikkeli 3 times for 3 different injuries!

Will was also supposed to film with us for a bit but separated his shoulder early on in the season, which made it hard for him to concentrate on two projects. All in all a really bad run of injuries.

Do you get time to snowboard yourself anymore?
Not really no, I used to ride regularly but now I don’t get the time to in the winter. Filming takes most of the winter up. Plus I always have in the back of my mind that if I fall and get injured breaking a wrist or something similar it might stop me completing the film because there is no one else filming. Luckily the broken ribs this year didn’t stop me filming, made it pretty uncomfortable but didn’t stop me being able to use a camera!

You can keep up to date on Grindhouse by following them on Instagram here.
Index photo: Jonny Pickup