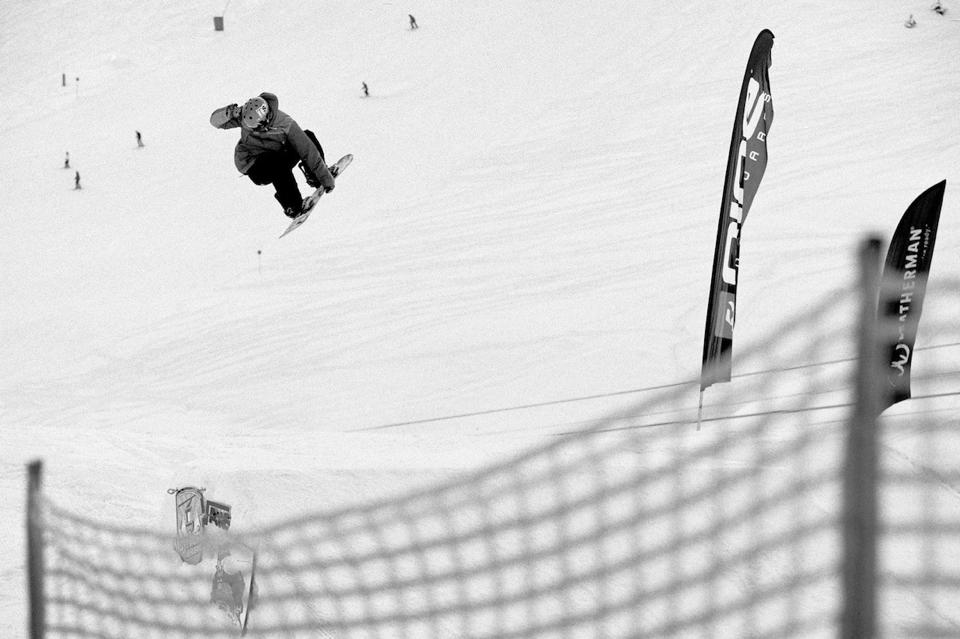 Through the fog at the Valley Rally.
Photo: Gustav Ohlsson

Where are you from and how did you get started?
I’m from the Highlands of Scotland, a good 3 hours north of Edinburgh and Glasgow. I live just outside Aviemore, so Cairngorm Mountain is ten minutes from my house, which is rad! I’ve grown up with snow sports from a young age as both my parents and all of our close friends are really into it. Growing up riding a mountain is awesome and I’m very lucky to have Cairngorm on my doorstep!   There’s a good scene on The Mountain and with the park getting better every year lots more kids are coming through!

Do you still get time to ride there or are you abroad more nowadays?
I travel a lot nowadays so whenever I’m home I try to make the most of it. Opening day is always amazing the terrain is really good so great times bombing the hill, riding side hits and getting freshies with all the local crew! Every year I travel back for the Vans contest and bring a few mates from the team, good vibes at that comp, the party’s rad and just a good way to finish off the season. The snow usually lasts until May and they run the park as long as they can end of season! Spend most of late spring filming with my brother and friends.

You are a part of the Gb Snowboard Team back in the day people used to laugh when they thought of the Uk team having a team but now they are proving their worth. What is their secret?
I think its determination and love of snowboarding. All of us started somewhere small; dryslopes, dome and I guess I’m lucky to have had real snow to learn on. The facilities we have are limited but suited for Slopestyle and that’s something I can see us really do well in the future, as the guys and girls showed at Sochi! We’re always looking to Europe and America and all of us are determined to work hard, get to that level and show what the UK has to offer. Everyone is really stoked on snowboarding, there’s a good atmosphere to progress in and I’m excited to see where it goes. 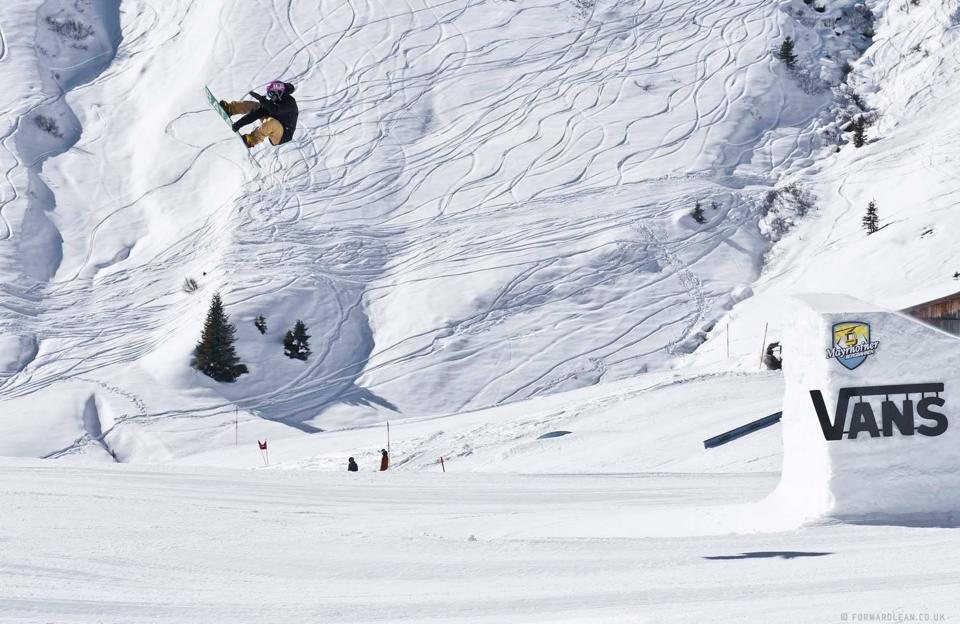 Which riders do you look up to on the GB team and whom do you usually ride with the most on team trips?
Team trips are awesome crack, loads of skating and snowboarding, it’s a fun group to shred with. I look up to the likes of Nicholls and Bill but to be honest in some way all the guys inspire me to push my riding. Lots of different styles and when everyone’s shredding together it’s sick! Usually cruise with young Shack, Rowan, Matt McCormick and Lewis Courtier-Jones banter is awesome and we always seem to learn lots from each other! Past few seasons I’ve been focusing on riding lots and training rather than contests so I’m looking forward to getting into bigger contests like European Open and gaining experience!

Would you rather podium at PyeongChang or film an ender part with a big production company?
If possible I’d love to do both! Reaching finals and a podium in the Olympics would be a fantastic achievement and something I aspire too. However it’s every snowboarders dream to get a rad ender part for a film! I love that side of snowboarding too and I’m hoping to get more filming done this year alongside my training and contests!

What’s the story behind your pink riding helmet? Do you always request that colour?
Hahaha yeah it’s not everyone’s first choice for a helmet! I get a lot of odd looks and MCs love the banter that comes with it! For me it’s really a bit of a lucky charm. When I was younger I got it for a laugh thinking I’d just have it for a few months. I began to do better at contests and my riding progressed a lot that season. I kept it for a while and within a season or two I was on the GB Junior team and doing really well. I’ve tried other helmets but nothing feels the same, the pink power, it’s the way to go! Only problem is hunting down pink Protec helmets there’s not many left….I’ve been through a few

You had a good year at the Brits, winning the slopestyle and 3rd in the pipe and winning the Monster Bangers and Cash rail jam, a lot of people seemed to have turned their back on the Brits, why do you think this is and what do you enjoy about the contest?
I’ve been to the Brits the past three years and always had a good time. I guess it was a mixture of expense (being in Laax was amazing for the park but not so awesome on the wallet) and I think people wanted change. After years of the same contests/format they wanted something that little bit different. With a change in resort and the introduction of the new Bangers and Cash rail jam it’s definitely made the champs a lot better and given it a new lease of life! With sponsors like Monster coming in last year I’m excited to see where the Brits can go and hopefully it can bring back more people each year! The weather is awesome that time of year and travelling over with your mates makes it a lot better! Good to compete against them and have fun with it as well, après not shabby either…. 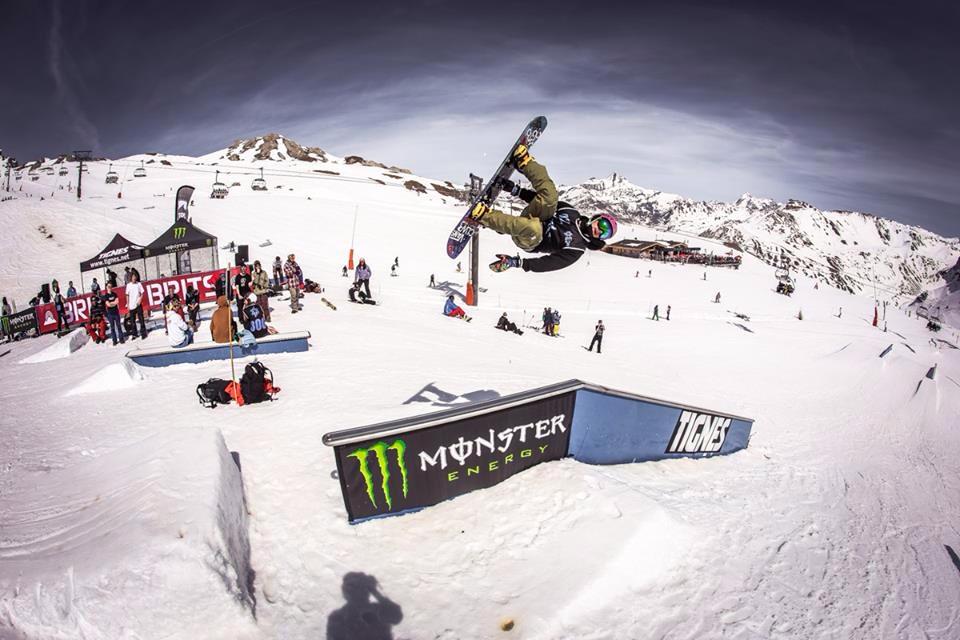 1st place in the Monster Energy Bangers & Cash at The Brits- No biggie.
Photo: Ed Blomfield

What tricks do you want to get locked this season?
For this season I’d love to work on a few new doubles and creativity in smaller tricks. In the past I’ve tried a few double backies and a double rodeo as well. Would be really stoked if I could work on them and get them on lock they look sick! Focusing on different grabs, corks and style in smaller tricks as well is something I really want to spend time on!