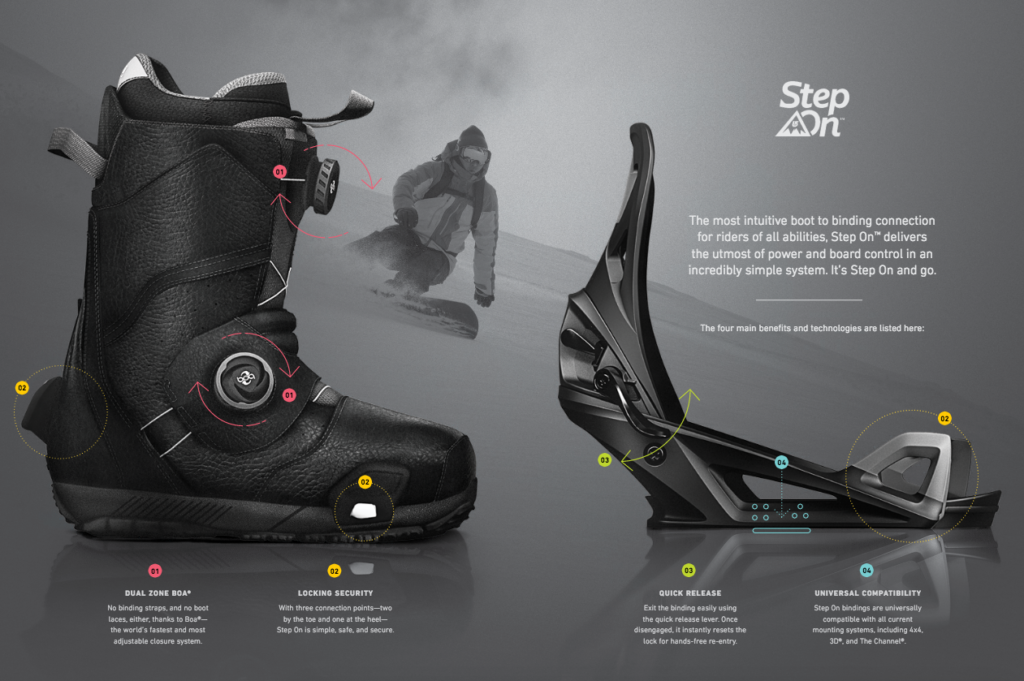 Burton’s official diagram of the Step On, but does it work?

In the late nineties my father came home with a big box and a huge grin on his face and proclaimed that he had the future of snowboarding in his hands. My 16 year old self took a look at the original Burton step ins, laughed and assumed he had finally hit the mid life crisis we had been expecting. After trying them out due to me unfortunately having the same sized feet, I vowed never to ride them ever again and wondered if Burton had set out to make a set of bindings that least resembled the conventional strap system.

Fast forward some 20 odd years later and rumours had been surfacing that none other than Terje Haakonsen had been spotted riding a new and highly secretive step in binding. Terje is not the type of rider that you can either buy off or one that will ride equipment that doesn’t work, could the Burton Step on actually be a legitimate system?

Last week I finally got to see for myself as myself and a couple of others headed over to the beautiful resort of Axamer Lizum, a stone throw from Burton’s European HQ, with the sole purpose of testing the Step Ons. 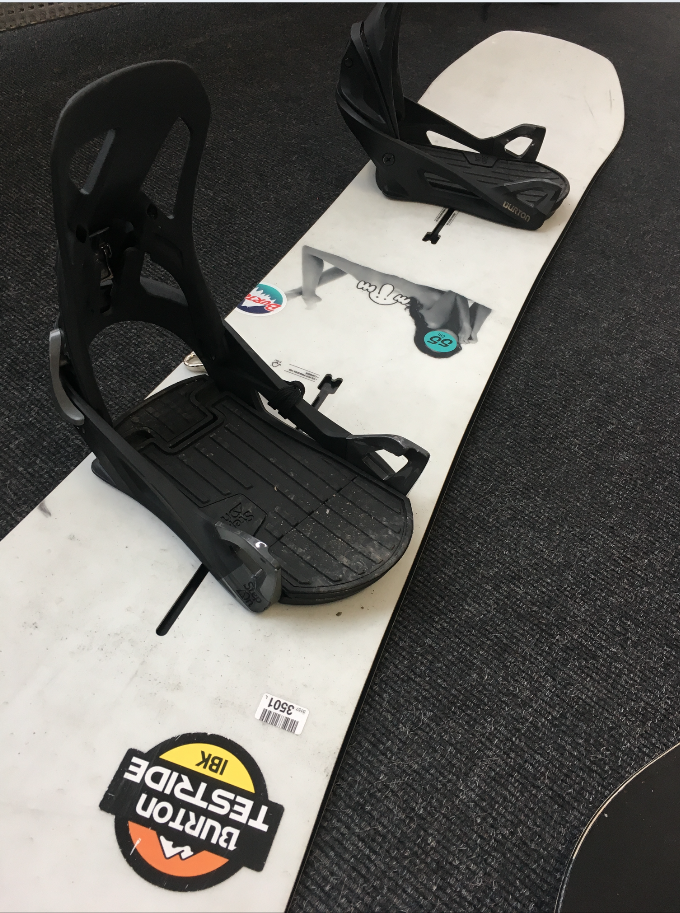 The step ons mounted onto the 2018 Kilroy Process

I was given a pair of the Photon Boots, which feature a double boa system, one of which goes across the middle of the foot in the same position of a heel strap of a conventional binding. The boots were comfortable straight out of the box and the same weight as a regular boot. Whilst they were comfortable, I found the extra heel strap area boa didn’t seem to do much and I rode with it loosely tied throughout the day.

The bindings look strange at first glance with them not having straps but were lightweight with a medium stiff highback. I’m currently riding the Malavita bindings on my regular set up and the highback seemed to be the same stiffness.

Once my bindings were mounted to the board, it was time to try and step on to them for the first time. You step into them heel first with your heel pointing downwards until you hear the first click, next you slightly rotate your foot to the side until you hear another click and then rotate to the other side to become fully locked in. It took me several attempts to get my back foot into position, something that I was beginning to find frustrating. That being said, the process of clicking in got easier throughout the day and became second nature by the end of whole day of using them. 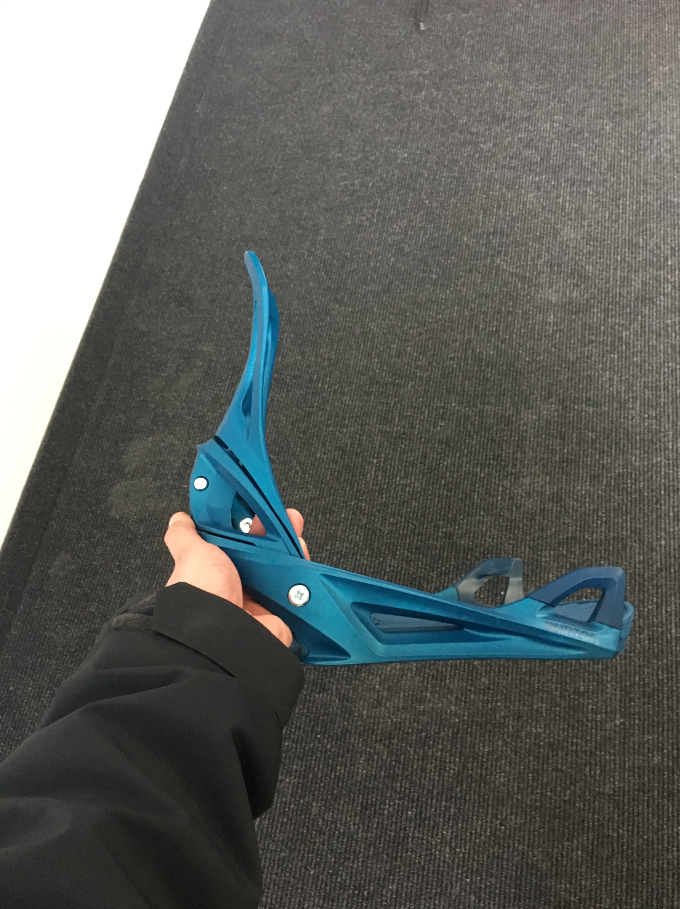 The first and probably the most vital change from the original step ins, is where the foot becomes locked down. On the system of old, the boot was held in the middle of your foot, exactly where it isn’t held on a conventional binding. With the Step Ons, the foot is held at the toes and at the heel, which closely mimics the feeling that straps provide and the feeling is instantly more natural and secure from previous attempts at this system. It’s such an obvious change but it makes all the different when riding.

Here is me stepping into the Step On, whilst there was sugary snow stuck into the back system. This sugary snow, didn’t jam the binding.

So the system is faster than regular straps but how does it ride? Well from the moment I dropped in I felt completely at ease with the system and any previous thoughts of me being catapulted out of my bindings diminished. I felt as secure in the Step Ons as I do in a regular binding, furthermore, because the heel is so locked into place, I felt that the bindings were even more responsive than my regular binding set up, so not only were they faster to strap in they seemed to offer an even better performance.

To release the bindings, you have to bend down to pull a lever upwards and twist your foot out of them. This took a little getting used to and the need to bend down is less than a regular binding but not completely gone.

I wanted to approach this test without any preconceptions on the Step On System and test them with an open mind. I snowboard a lot and don’t consider my strap bindings to have any problems, nor do I find strapping in and out of them a long process. That being said there are some resorts or indoor domes that are really short and there it can become a pain to constantly unstrap and strap in, especially when you are doing it every 2 minutes or so.

Whilst I wouldn’t consider myself to be in the target market group for the Step On, I really liked the system. It performed as good or perhaps even better than my conventional set up with the added bonus of it being faster to get into. For your average snowboarder that rides a few weeks per season, someone who hates the process of strapping in and out, I genuinely see the Step On as a game changer for them. Burton were telling us that not only Terje rides them as their daily set up, Mikkel Bang, Marko Grilc and even jibber and all round park bossman Max Zebe is considering to ride the Step On on a daily basis. If I was allowed to have kept the boots and bindings I would ride them daily too, I just couldn’t fault them. If I really had to find something I didn’t like, it would be that I’ve had the Boa system fail on me in the past and I prefer the reliability of a conventional lace boot. I understand that Boa is easier for some people but hopefully they bring a lace boot into the collection in the future. 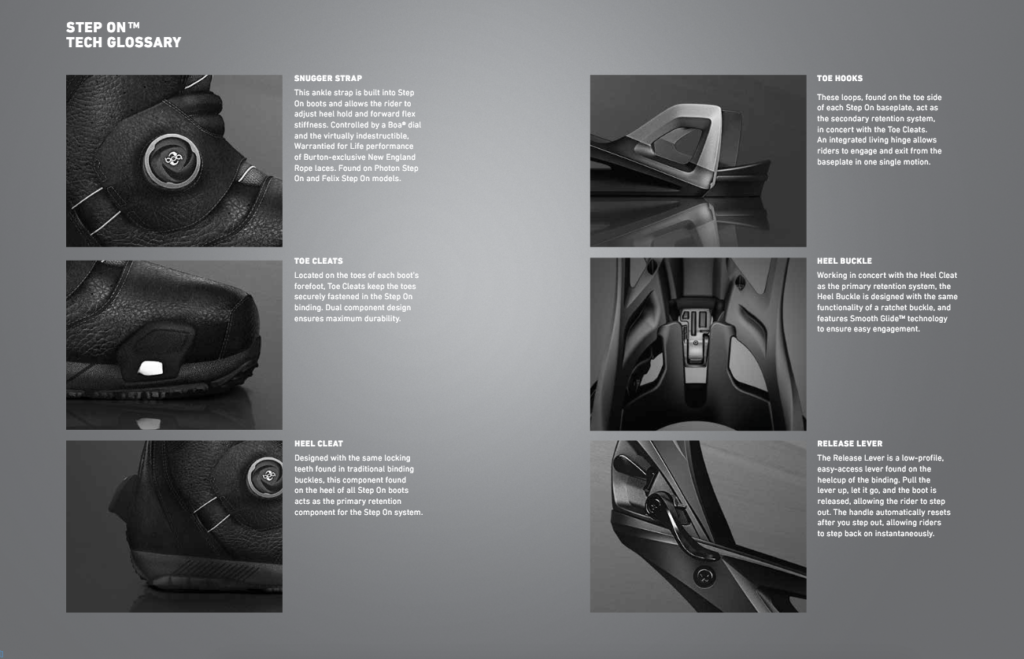 Since this test I have literally had a million questions about it. Here are some of the most common questions answered below.

Does the system Jam up in Powder?
I stepped in and out of them in both champagne and sugary powder and the system didn’t jam. I had to swipe the snow out of it, the same way you would with a regular binding.

Can you strap in on a steep hill?
Yes, to a certain point. I tried this on a really steep face and had to sit down but would have to sit down with a regular binding too.

Will this binding ruin snowboarding?
No and it will probably encourage more people to take it up the sport again.

Can you ride this in park, on rails and pipe?
Yes it feels totally secure and is backed by some of Burton’s best riders already.

Were you paid to write good things about the Step On?
Other than some chips and chicken wings at lunch I received no payment and this is my honest opinion, everyone else on the test liked the bindings too.

Would you ride the Step Ons as your daily set up?
Yes I would.

The Photon Boot and Step On Binding is out in Autumn 2017 with a combined RRP of 670 Euros.