You have been doing well at big air, slopestyle, pipe and even Boarder X contests recently, which of these do you like to ride the most?
I enjoy everything but I definitely like slopestyle the most, because you can use your creativity throughout the whole course.

After doing all of these contests, you still found time to film a lot with your friends, do you ever get tired from riding so much?
Yeah, like when I’m snowboarding for 3 weeks straight I really need a break but right now I really miss snowboarding and can’t wait to be back shredding.

What are you goals within snowboarding?
Well one goal for sure is to participate at the next winter olympics, but I also want to try to ride some street spots and also film for my own street part, because I really do love filming and I’d like to try something new as well.

You are a part of the German Snowboarding team, do they put the main attention on contests or do they also push you to film more?They mainly put the attention on contests. We travel a lot like for the Eurocups and World Rookie Tour and all that stuff and if there’s a bad weather day or the comp is over we still shred and film along with our coaches.

You are the younger sister of Ethan Morgan, what have you learnt from him and do you get to ride together a lot?
Oh I’ve learned sooo much from him, but for sure the biggest lesson I’ve learned is that I shouldn’t party as much as he does. I actually get to ride a lot with him even though he travels all the time. We always enjoy snowboarding together and do crazy stuff. Snowboarding is like bonding time for us. 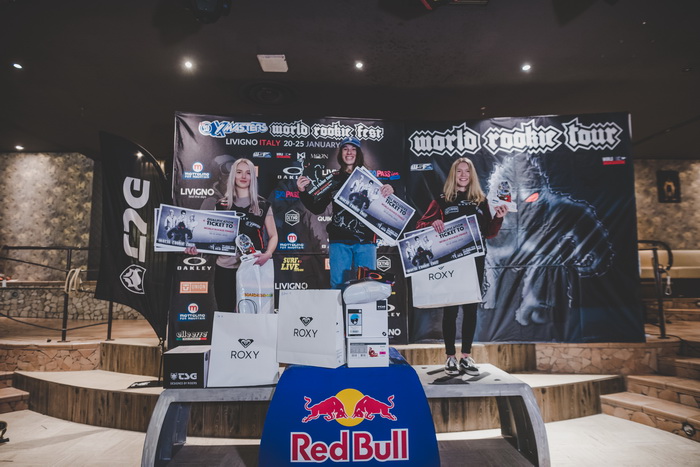 Annika on top of the podium at the World Rookie Tour

Does Ethan help push you and your riding?
Yeeesssss all the time. Sometimes he pushes me to do something even though I don’t want to. Eventually he talks me into doing it.

You travelled a lot with the German team, what was the best spot you rode at this season?
Probably Laax, because the setup is sooo perfect and I got to see all my Swiss friends.

Which riders do you look up to and why?
I’d have to say Hailey Langland, because she’s the style queen. Anna Gasser, because she is so tough. If she slams hard she just keeps on going and does the craziest stuff and kokomo Murase, I mean she is the first lady to put down a 1260 ever… oh and she’s only 13. But to be honest I admire every girl snowboarder out there, because we push each other to make this sport look really interesting.