Victor De Le Rue has been making noise in the past couple of seasons. After coming from a slalom and boardercross background, he thankfully increased his social ranking and headed over to the Big Air contest circuit before finding his natural home in the Alaskan backcountry. De Le Rue filmed with some of the last Standard Movie projects but when he successfully secured the ender in Absinthe’s Dopamine he found mass fame and consequently has featured on some of the gnarliest descents from AK ever since. Victor manages to bring technical freestyle tricks into the backcountry and the result is one of the most exciting spectacles in recent times. Coming off a grueling schedule filming for two video parts, including The Fourth Phase with Travis Rice, we managed to catch up with Victor as he took some time out between trips to chat about his new partnership with Vans, life growing up, how all his siblings are pro and much more.

When I was growing up David Vincent, Frank Screm were massive French influences, later followed by Matthieu Crepel but they were more known for their freestyle riding at that time. Do you feel like yourself and Xavier are opening a new pathway for up and coming French riders that want to focus on backcountry?
Well Xavier was more slalom, boardercross at first and then backcountry and now he’s freestyle backcountry. He for sure was a huge influence for me for freeriding. He is 10 years older than me so he was between the generations between Crepel and myself and he was famous way before us.
I don’t think we opened up freeriding for French riders alone but we had a few generations that were group of friends that inspired it. Crepel and Tristan Picot were influences for me as were Xavier and Thomas Delfino.

You have 5 siblings that are all renowned snowboarders in their own right. Obviously we know Xavier but you also have a brother who won a boardercross bronze in Turin, your sister that was Junior Vice world champion and your older brother was a French vice champion in his prime too. What did your parents do to create this elite family of riders and which for you was your main influence and guardian as you were growing up?
Our parents were doing a bit of skiing and they always worked crazy hard in an Intersport they own in the Pyrenees, because they were working so much, they would just send us off into the mountains. My brothers and I were at the ski club and just always on snow. At some point we went to Les Deux Alps in November and they were stoked for us and they gave us the opportunity to go. They were strict with the older brothers and their competition lifestyle, saw it worked out for them and when I was following the path of my siblings I was encouraged to take that direction too. I would imitate them going to the competitions and I was riding little by little, starting to compete and I liked this lifestyle. No specific family member was an influence at first but when Xavier started to do well, we started to look at his lifestyle and saw it worked so I started to copy him a bit more. 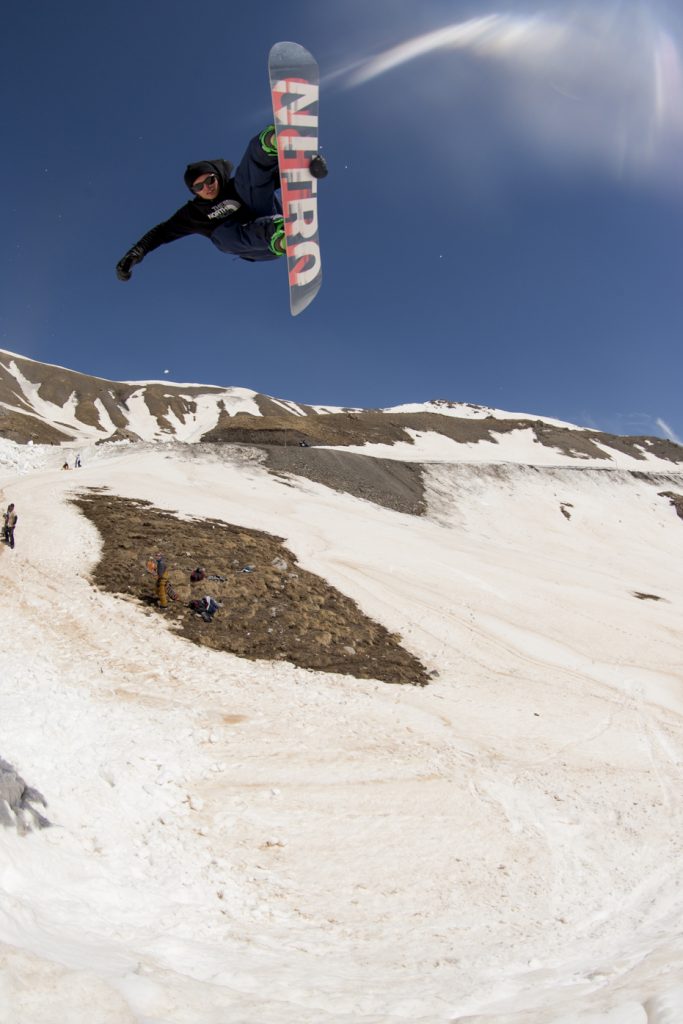 Victor taking some time away from the pow Photo: David Tchag

You used to do big air contests around 5 years ago. When you look back on those times, did you know that one day you would venture off into the backcountry or did you see freestyle as your future?
I started with boardercross and competitions in freestyle, got some sponsors and when I got those I had to choose between BX and freestyle and I started to ride freestyle more. I was focused on freestyle and doing contests but when I started riding for Ripcurl they gave me the opportunity to do more freeriding. At first it was just a little in between contests but I was riding backcountry more and more and that’s what I enjoy more. There wasn’t a plan to switch to it fully, it just gradually happened and I rode more of what I felt like. I get to ride what I want to now and the backcountry just happened more naturally.

Do those big air jumps seem like a more relaxing day snowboarding compared to what you are riding these days?
The competitions are easier because you know what to expect. You turn up, train, try to do your best and then fly to the next contest. The backcountry has way more planning involved following the forecasts. Contests are planned before and you know what you will do with backcountry it just depends on the conditions, you don’t know what trick you will do until you are there at the descent, you can’t pre plan in the same way you can at a contest.

What was the point that made you venture off to AK instead of Big Air?
I was not that great at big air but was trying the world cups but not doing that well. For AK I was going with friends, being creative and just riding powder, working super hard and having a great time and putting together some video parts. One year I had the opportunity to film with Standard with Xavier, he was going to AK and allowed me to go. The first time I went was 6 years ago and I loved it, now every year that’s the place I want to go and it’s on my mind the whole time, it’s just the best feeling for me now. I was thinking in the past that I should go to the Olympics in Sochi but I realised that was more for my sponsors and not something I wanted to do for myself, I don’t think I was at the level that I really needed to be to go there. 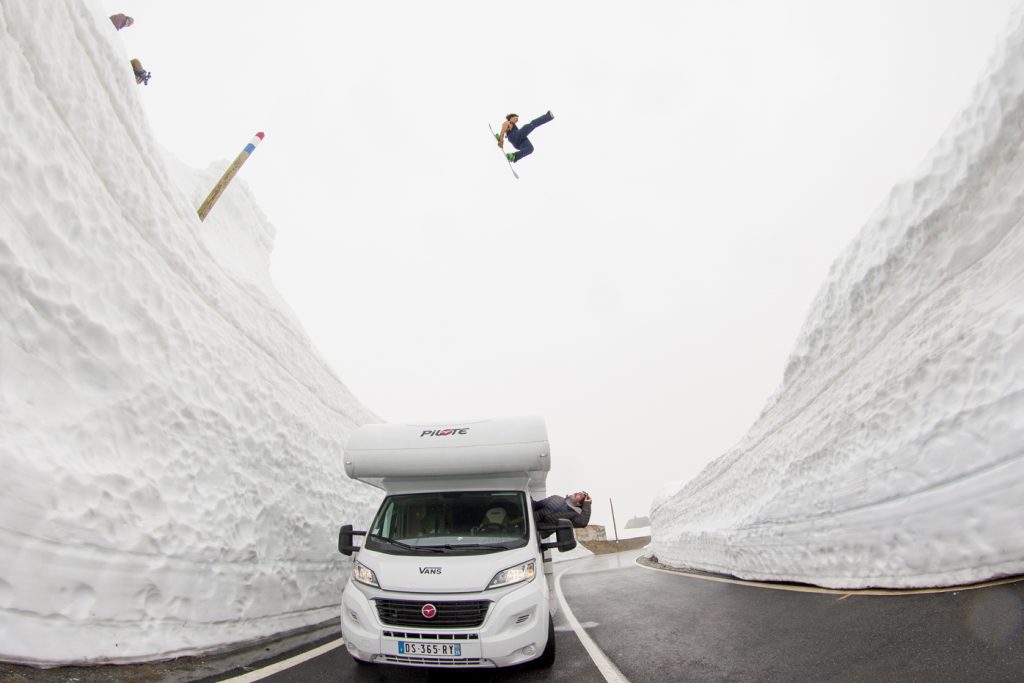 When you’re at the top of an AK line do you think a lot about consequences or just let the moment take over you? And how is it to prepare for a day ahead, do you have you to talk yourself into a lot of descents before you do them?
When you are in the zone, in the heli in AK, you really take care to look at the lines with binoculars and cameras etc. You always get a choice if you want to take the easy line on the left or the fucking gnarly line. I always went with the one I felt confident on and that didn’t scare me. With experience you can choose the line that feels right at the moment and the one you can enjoy. It’s all a case of overseeing the line before, if there is a crevice, you know to go right at the bottom, cliff to the left etc. and you piece the lines together in your head before you drop in. So I drop in and am aware of those key moments in the run but not fully focused on every turn. If you do that the line doesn’t look fluid and I think it shows on camera. Even though you know your line by heart before you drop, I’m still nervous, as you don’t know the snow or what could happen. Even though you know what to do in an emergency and how to escape if it does go wrong it is still nerve wracking.

Some riders are struggling to get a video part these days and you are in 2 movies this year with The Fourth Phase, TWS’s Insight. Did such a heavy filming schedule drain you out or leave you thirsty for more?
Usually I like to focus on one project and do it 100% and kill it but I had the opportunity to film with Travis for 2 months and I couldn’t say no. It was a really hard trip riding wise though. We had 38 days of waiting for 7 days of riding due to bad weather and he got injured in his avalanche. I would have loved to show way more of what I could do. That left 2 months to film for TWS but I didn’t get to show my best but I think it turned out alright. It’s not the best part ever from me but if I combined everything it would have turned out better. Riding in AK always leaves me hungry for more though so I am ready for the new season ahead.

The Fourth Phase got a mixed response overall but what everyone did seem to agree on was that your part was literally insane. Do you think filming for such a big release at that will propel your career into another dimension?
I think this was the biggest project I’ll ever be apart of and I’m so thankful they and my sponsors allowed me that opportunity. I’m hopeful that filming for a movie on that scale will allow me to make more cool stuff happen in the future.

How did you new relationship with Vans begin?
I have wanted to be on Vans for many years and I was talking to Bruno the team manager about it for a long time. I kept hassling him each year but there wasn’t space for me those times. I’ve always worn Vans since I was 12 at school ,so I’ve always wanted to be on vans as it’s such a sick brand and so original. Now I’m finally on the team and it’s a dream to be riding for a cool company with such a strong team. The global team is such a crazy level so I’m stoked to be a part of it.

After such a big year, what can we expect from you next season?
We are going to start our own filming project called The Next Step, it’s in the real early stages of planning at the moment but hopefully that’s the plan and we will see how that goes. I would like to combine filming for that and also for the Vans movie that starts filming this season as well, another busy season ahead.