What can you say about Jamie Anderson that hasn’t already been said a thousand times before? The bookies favourite in every single contest and one of the most progressive women riders to have ever strapped in. Jamie has dominated contests since 2001 and shows no sign of burning out yet. Her signature style is not only easily recognisable but perceived by many to be a cut above her counterparts. Jamie uses her status to promote her other passions such as the environment, healthy living and yoga, making her an ideal ambassador. Here is Jamie in her own words.

You have got more wins than any other competitor; does winning all the time ever get a bit tiresome?
Haha yeah sometimes, it’s kind of humbling to have someone else ride really well and beat me because it reminds me how hard we all work and it’s good to be humbled every once in a while.

You seem calm before you compete, do you ever get nervous before a contest?
Yeah I get nervous a lot of times but I really try to relax even through the nerves that I feel. It’s kind of fun to play with them a little bit.

Are hugging trees the secret to your success?
Trees are a huge secret, not only trees but I think just nature in general and having a good attitude. People always notice that I’m really happy and happy to be snowboarding. I think when you’re having fun it makes a huge difference. So for me between music, having gratitude is a big part of my life and thankfully yoga for the last few years just helped me to connect more with myself. I’m able to deal with stress and things differently than when I was younger.

Do you ever think that even if you are having a bad run the judges might mark you higher as they know you can do better?
Yeah, I definitely think that over the years after winning pretty continuously, I think the judges know if I’m trying or if I’m kinda taking it easy and sometimes I think they can totally judge you against yourself, knowing that you’re capable of more and yeah… that’s the way of the road! Haha 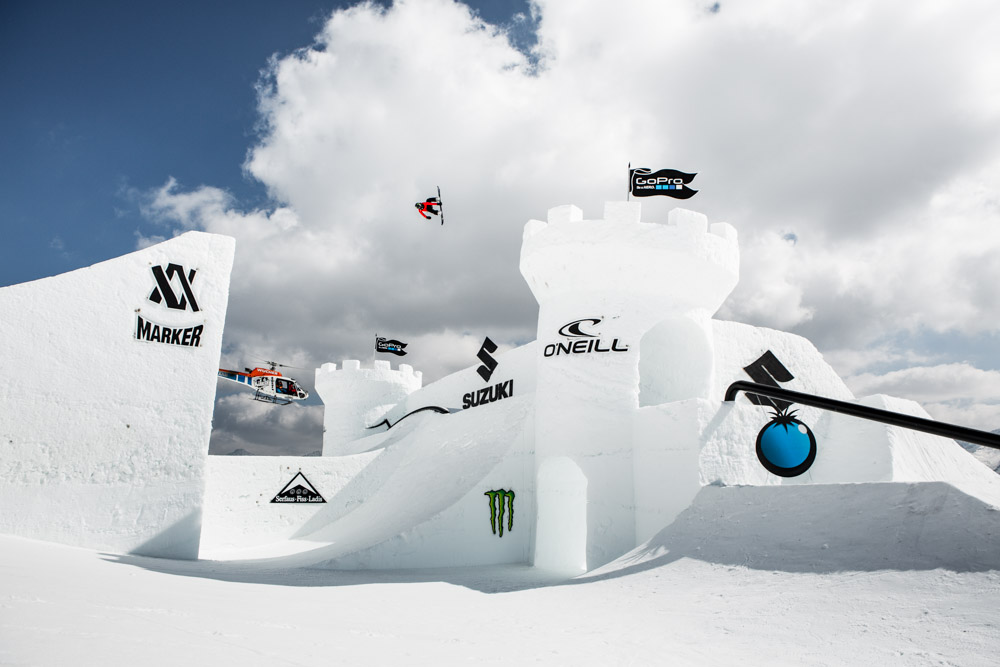 There has been a lot of talk recently about the progression of women. It seems last season we saw a lot more progression than in previous year will this continue?
Oh yeah. I think the Olympics being over was a big relief for all the athletes and everyone seemed to have a more relaxed, fun year, which naturally makes everyone want to learn more and not have so much pressure and stress. At least that’s how I felt personally, just more open to wanting to learn more and wanting to progress and ride with people that are better than me so that I can thrive off them. This year has been huge for me, being able to ride with the guys, tag along and have that encouragement of everyone telling me: you can do a 9 and a 10, and having my back makes a huge difference. Whereas when I ride with the girls we don’t even talk about 10s! So for me, I like to be around people that are better than me and I really enjoy riding with the guys, being inspired by them.

What tricks can we expect from you next season?
I want to get some more inverted tricks, I’ve been working on a back rodeo and I’d love to link back rodeo, cab 10 and switch back 9. I’m also working on a front 10 but those tricks, every time I do them, they are so scary! They take so much energy that it’s really hard to think about pairing them in a competition run, but I think over time, if I work hard and just practice and get stronger, like literally get stronger and build more muscle, it will be easier. I feel like sometimes it’s even too hard for me, for how small I am. So that’s a goal of mine this summer, to get healthy and strong so I can ride better and feel better.

The qualis for the next Olympics will start at the end of next season, will you go for the 2018 winter Olympics?
Hell yeah! haha I really want to just progress for myself and I really like competing, it’s been a big part of my life since I was a little kid. Now that I’m older and more mature it’s been really fun to balance how crazy it is and all the energy and all the ego you have to deal with. It’s important to be able to stay both humble and grateful and be your true self. Sometimes it’s easy to let all the madness get to your head and I think it’s important to stay grounded and remember how easy things can be taken away, just as quickly as they are given to you. 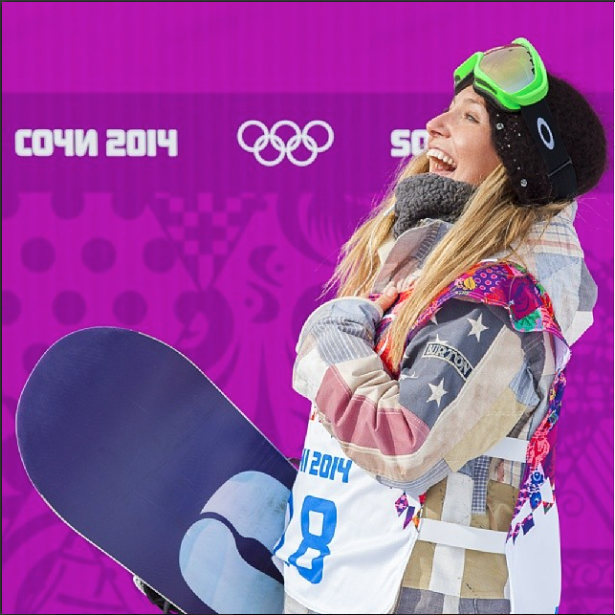 It seems in surfing women have to project themselves more sexually than the guys, is the same true for snowboarding?
In a sense yes. I think it’s really cool that almost all the women snowboarders and skiers are really beautiful, I mean not only are they talented but they are hot babes! I think it’s cool that you can showcase that, that you can be a feminine woman but still do sports and do things that you love and not be so afraid because it is a really male dominated world and hard to balance that and be how you are. So yeah, I think it is not quite a sexual as the surfers but the women are definitely showcasing feminine beauty, which I like to see.

Do you think a better-looking female competitor would receive more support than a less attractive rider – even if they were at the same riding level?
I think this kind of goes back across the board of everything, as unfortunate as it is. With the guys and the girls, yeah, if you’re beautiful athlete and there’s someone who may not be as attractive, I think brands generally look at that across the board, what’s gonna sell good, what’s gonna be good, but I don’t think it’s a huge part, I think that’s just kind of the obvious. For the most part I think it’s pretty balanced in our sports but that stuff definitely weighs in.

You did a naked photoshoot last year, how did that go down? Did people respond positively?
For me, being asked to be on the cover of ESPN was a huge deal. I’ve definitely never posed naked or even in a bikini suit or anything before so I didn’t really know what to think of it at first. For one I’ve always really loved that issue, it’s such a really positive way to showcase the body in all different kinds of shapes and sizes. So I thought about it for a little bit and I thought it was a really cool opportunity to stay  true to myself and not try to be anything I’m not. So it was good, just super empowering to stay comfortable in your own skin, it’s such a Hollywood lifestyle sometimes for me, growing up in Cali and just in general life everyone wants to be really skinny and fit and I think it’s more about being strong for you and finding what works. Everyone has a different body types, so really showcasing yourself, for me I felt so proud. I had won the Olympics that year and done so much and of course being a girl I was like “I wanna get skinnier and more fit”, I ended up braking my foot a month before the shoot so it was kind of like the universe telling me “Chill out, you don’t have to try so hard – just love yourself”. That was my biggest teaching and more empowering than anything and I loved it, I thought it was a really cool experience and having all of these photos, when I’m a grandma I can be like “damn, I used to be a hot babe!”

And for the most part, people’s reactions were pretty good too. I think some were probably a bit shocked, definitely some of my young fans too, but I think it was tasteful, photographed well and overall I got a lot of good feedback. 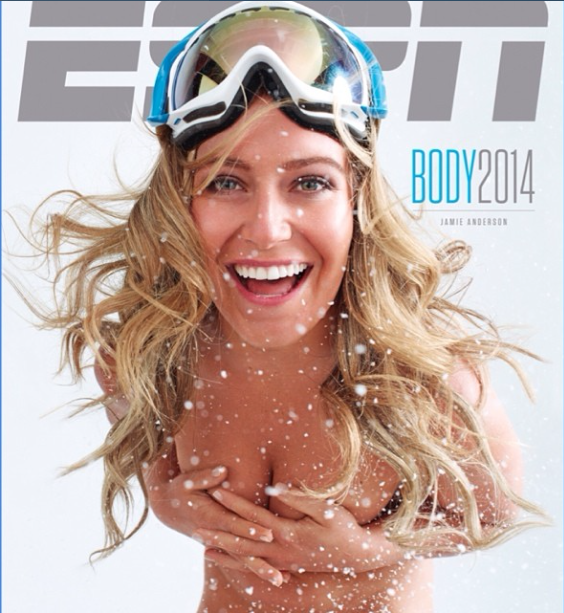 Obviously the environment is a big passion of yours, can snowboarding ever really call itself an environmentally friendly activity?
Not really, not the snowboarding that I’m doing. Contests are definitely not at the heart where snowboarding came from and I find myself supporting events that are really harsh on the environment and not only that, but I’m traveling all over the world to participate in them! So it’s really hard for me, knowing how much I care about the earth and wanting to have a farm and grow my own food and really be less impact, but what I find I’ve been so blessed with in this lifetime is that I’m able to fall in love with so many different places of the planet and people and get to connect to people about how much I really do care about certain things. We’re all using oil and that’s a huge issue that we’re dealing with but I also think that there’s so much good that we’re spreading also, going around and talking about it and I definitely not saying that I’m a saint, I fly all over the planet and I know that’s terrible but I try to spread awareness where I go and in turn that can be the give-take of the universal laws.

You’ve competed for a long time and obviously had a great success, are you tempted to move away from contests and focus on another aspect of riding in the future?
Yes, definitely! I’m so passionate about snowboarding and competing has been really fun, but I’ve always known that the real heart of soul shredding is riding the mountains. For me it would be being able to climb the mountains and make it totally sufficient and sustainable like Jeremy Jones and doing projects with Protect Our Winters, Marie-France Roy and her project, The Little Things, those are the projects to me that are so cool. The path I want to take is using what we have to make the planet a better place. I think that all of us have gifts and talents to give and it’s a matter of tapping into what we really love so that we can inspire each other to find that within. We all have something different and it’s so cool. For me snowboarding is one of my passions but there are so many things I care about and it’s so fun, life, learning, growing and I can’t wait to see what the future holds! haha.