This Olympics you blitzed it and came away with a silver medal, how has life changed for you since that run. Are you now all over the media in Finland?

hahah it hasn’t changed that much, Now I have a lot of media stuff in Finland though and people recognize me easier than before the games. I just have to think more now how I act in public.

You headed into the games, with an injury from the BEO, did you expect that you would come home with a medal? I didn’t expect it at all, actually before my final runs I didn’t care at all if I’m gonna get a medal or not! I just wanted to do couple tricks well and get a good vibe from the runs and then go home and just ride.

After you won silver the president of Finland called you up for a meeting, did he have interesting things to say or was it more of a meet and greet session? Did you bring up any issues that affect your life at home?He was really interested about snowboarding and asked a lot of questions about the contest. I just answered his questions, he was watching our finals and visited our place in Sochi after the contest.

You obviously do a lot of contests, is that something that you like to ride or is it more what you think your sponsors expect of you? You had your own tv show with Red Bull last season, “Enni Time” Would you rather film more in the future than hit up the contests scene? I would like to do some contests but not that many as last year, I really would like to learn how to ride pow and film more. My dream is get to film a real videopart which includes all kind of riding. I have tried to film every season as much I can besides the contests.

You like most Finns are quite a quiet person until you get to know someone. That seems to typical character trait among Finnish people is that a fear of speaking English or are you as a nation quite reserved? I think it is just the way how Finns are, we are really reserved and we don’t want to make a big noise about ourselves. When we meet new people we kind of  take it easy at first and when we get to know them better, we open up and we talk more. 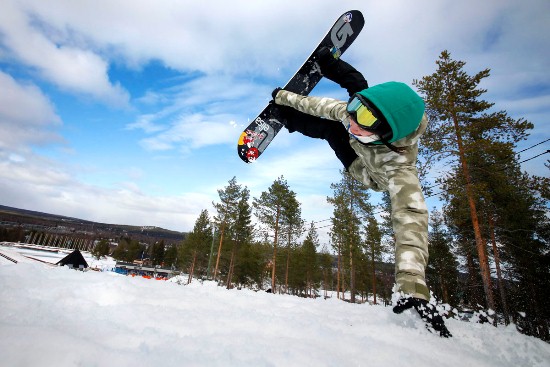 What would you like to see yourself doing after you quite riding? Can you see yourself staying in the industry? Possibly yes, I would like to stay in snowboarding as long as possible